We Have Some of the  Best Chefs in the Business

With an extensive background in the food and beverage industry and over 16 years of professional experience Chef Dalton has put together an elite team of independent personal chefs, restaurant chefs, bartenders, and professional servers to make your next event an absolute success. We pride ourselves with providing the best quality food and service available. 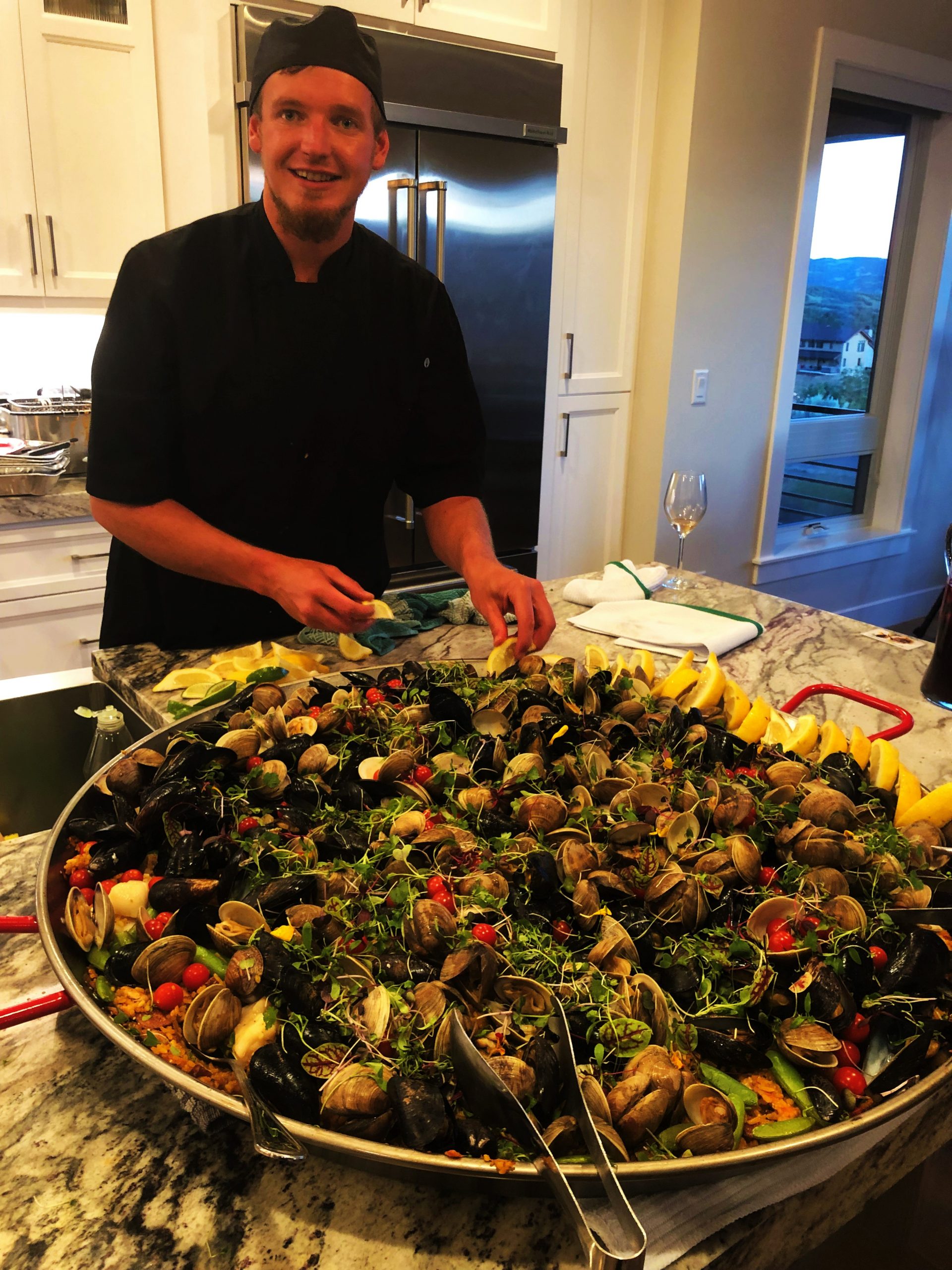 Chef Dalton Campbell has a burning passion for food. He began his career in the culinary field at a local southwest/Mexican restaurant the age of thirteen, in the quiet town of Kamas Ut.  Although he began cooking as soon as he was tall enough to stand on a step stool and reach the stove. Growing up Dalton always had a strong desire to cook and among his friends he was known as the kid that can cook. He comes from a back ground of very culinary talented family and though he has not had any formal training he has developed a unique, gourmet cooking style of his own.

Dalton soon moved up the culinary ladder at a local breakfast/lunch deli and began line cooking breakfast and overseeing the creating of new menu items, continuous specialty food changes, and became the head pastry of the restaurant.  In 2009 Dalton began working as a prep cook at a local catering company Done To your Taste Catering under executive chef Brian Southworth. Brian has an extensive culinary resume running fine dining restaurants in California and presented Dalton with a great opportunity to develop and fine-tune his culinary physique.

Chef Dalton then was given the opportunity to become the Executive Chef of Lynn Anderson Catering a new company in Park City. While working for a graduate of Le Cordon Bleu Culinary Institute Dalton assisted in devolping and establishing the new catering business. Chef Dalton began to make a name for himself as an amazing new young chef in the catering industry. Thier new catering company was the premier food service provider of All Seasons Resorts Lodging which managed several hotels in Park City including the Sliver King, Caledonian, Park City Lodge, Shadow Ridge Etc. With a life changing event the owner of his new catering company had to move out of state, so Dalton began seeking work back at Done To your Taste Catering and became their Sous Chef.

Starting in January 2014 through January 2016, with a new scope of experience under his belt Dalton then took over the Executive Chef position at Done To your Taste Catering. While managing the back of house food and beverage operations Dalton began to hone in on his unique culinary back ground to critique and fine tune his culinary skills and expertise while executing a large variety of themed events feeding anywhere from 2 to 2000 people a day.

Over the years Dalton has developed a unique, simple, fresh culinary style incorporating the techniques of authentic Mexican, South American, Cuban, Mediterranean, Italian, French, American and Asian cuisines, along with the addition of marvelous artistic presentations Dalton has created a diverse New Americana Flare cuisine of his own, which now he would love to share with you as he launches his business Park City Elite Private Chefs.

“Cooking and creating purely from passion and soul” 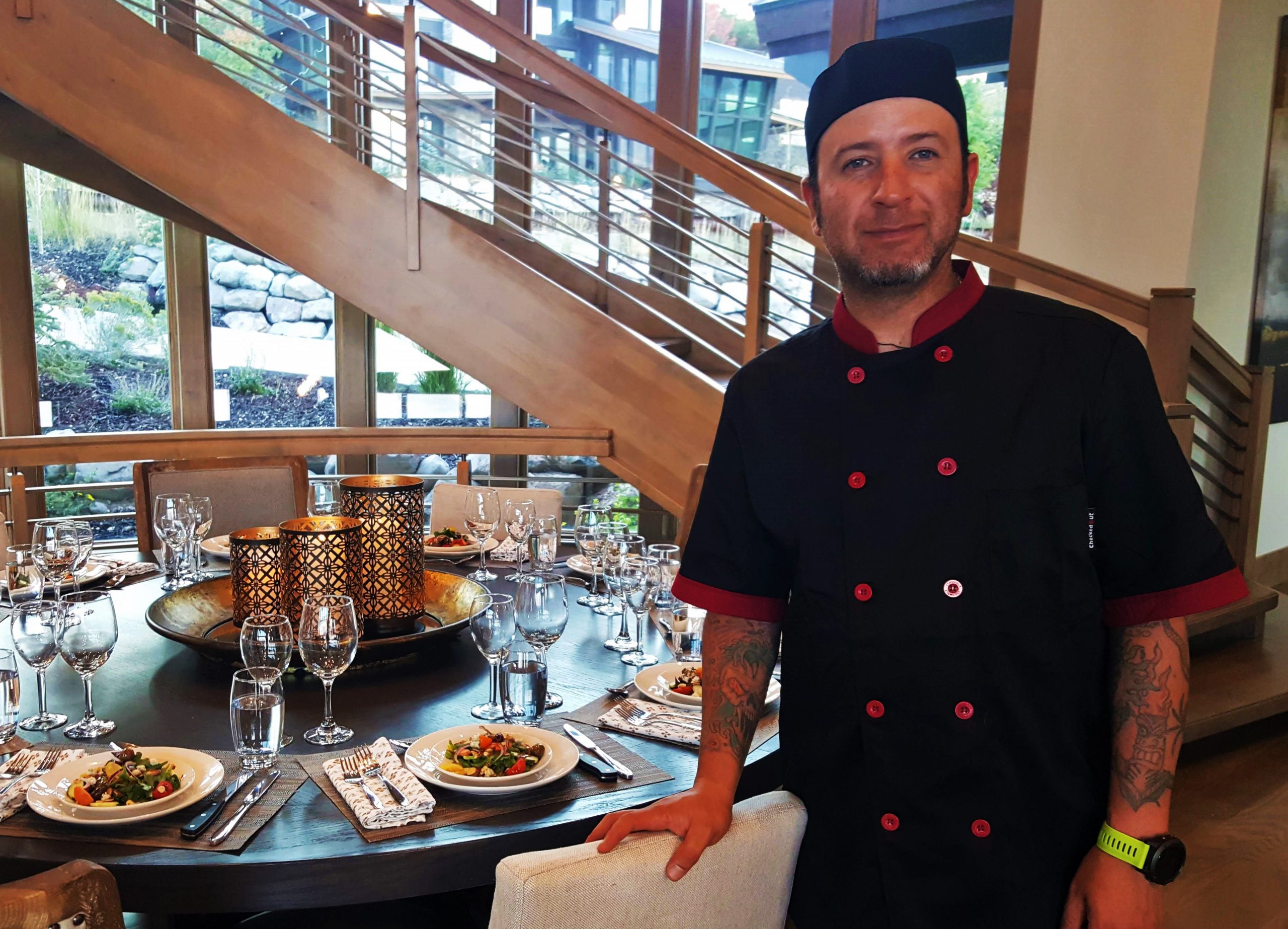 My name is Fernando Chavez-Sandoval, and my love for cooking began in my early teen years as a means to bring my family and friends closer together. As I grew into adulthood, I quickly knew I wanted to professionally pursue the culinary industry. Being an immigrant in a new and exciting culture, I wanted to grab and hold onto the American Dream. Understanding that takes dedication and hard-work, I snatched my first job as a dishwasher at the locally renowned Gateway Grille in Kamas, Utah. I wanted to know everything about how the restaurant world works inside and out, and the only way to do that was starting at the bottom and working my way upward. Over the next decade, I worked aside multiple restaurant and catering companies in the Park City and Deer Valley areas and absorbed every bit of knowledge I could from every chef I have been so lucky to stumbled upon. As a Line Cook, I worked my way up to Sous Chef and then Head Chef and eventually Executive Chef.

Well over a decade in the restaurant industry, I was blessed with the opportunity of meeting a wonderful family that wanted to start an artisan cheese-making business. Alan and Debbie Gold approached me in 2009 to help them pursue a high-quality cheese in the midst of the overpopulated mass cheese production industry. It was our goal from the beginning to place quality over quantity, and therein make the best and most delicious cheese we could. That same year we launched Gold Creek Farms. In my first three years of cheese-making, I was able to accomplish the most prestige award of 1st in class at the World Champion Cheese Competition (WCCC) in 2012 (http://wccc.myentries.org/contest/results/?event=55&eventClass=287). From there, I am humbled and proud to say we have earned multiple awards with the American Cheese Society and the United States Champion Cheese Competition in addition to a few more with the WCCC.

Becoming a Private Chef has granted me the ability to expand my creativity with food and adapt to new food trends and the evolution of diets throughout the years. I have been so blessed to have the opportunity to cook anything from classic French cuisine to more modern dishes that use science to replicate foods like dairy, eggs, gluten. My career has blessed me with the opportunity to cook for presidents, political figures, CEO’s, business professionals, famous sports figures, celebrities, and so many other amazing people whom have truly placed an imprint on my career and life. Each and every event is exciting and I consider a blessing to add onto my culinary experience. Loving both cooking and food so much, I can truly say I have found my niche in life. I truly hope I get the opportunity to cook for you, too! 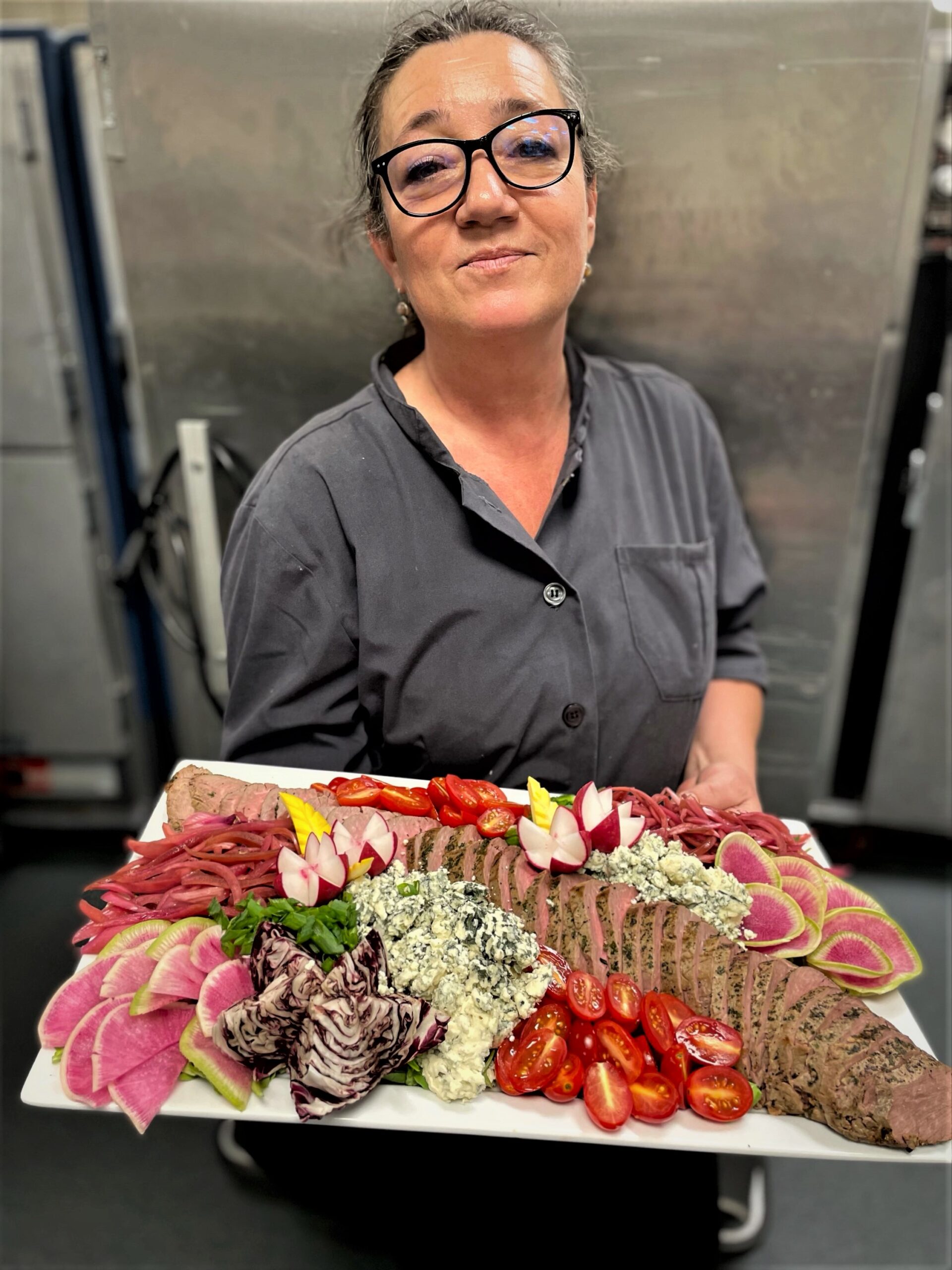 Swiss-born chef Patrizia Krejci has been a successful chef and restaurateur for over twenty years, Valuable experience in the great culinary cities of San Francisco and New York, early in her career led to over six years in the alps, Gstaad, Switzerland.  And then, chef owner of a celebrated farm-to-table restaurant in the Northern Chesapeake, The Fair Hill Inn. As a private chef, Patrizia has had several years in fine homes of UHNW families in Washington, DC.

Chef Patrizia has a BS in Hospitality Management from University of Massachusetts and holds and MS in Physiology from Georgetown University. She has also attended Cesar Ritz Institut Hotelier in Le Bouveret, Switzerland as well as taking classes at Natural Gourmet Institute in NYC.

Park City has become a second home for Patrizia where she enjoys cooking as a mountain chef, in some of the areas finest homes. 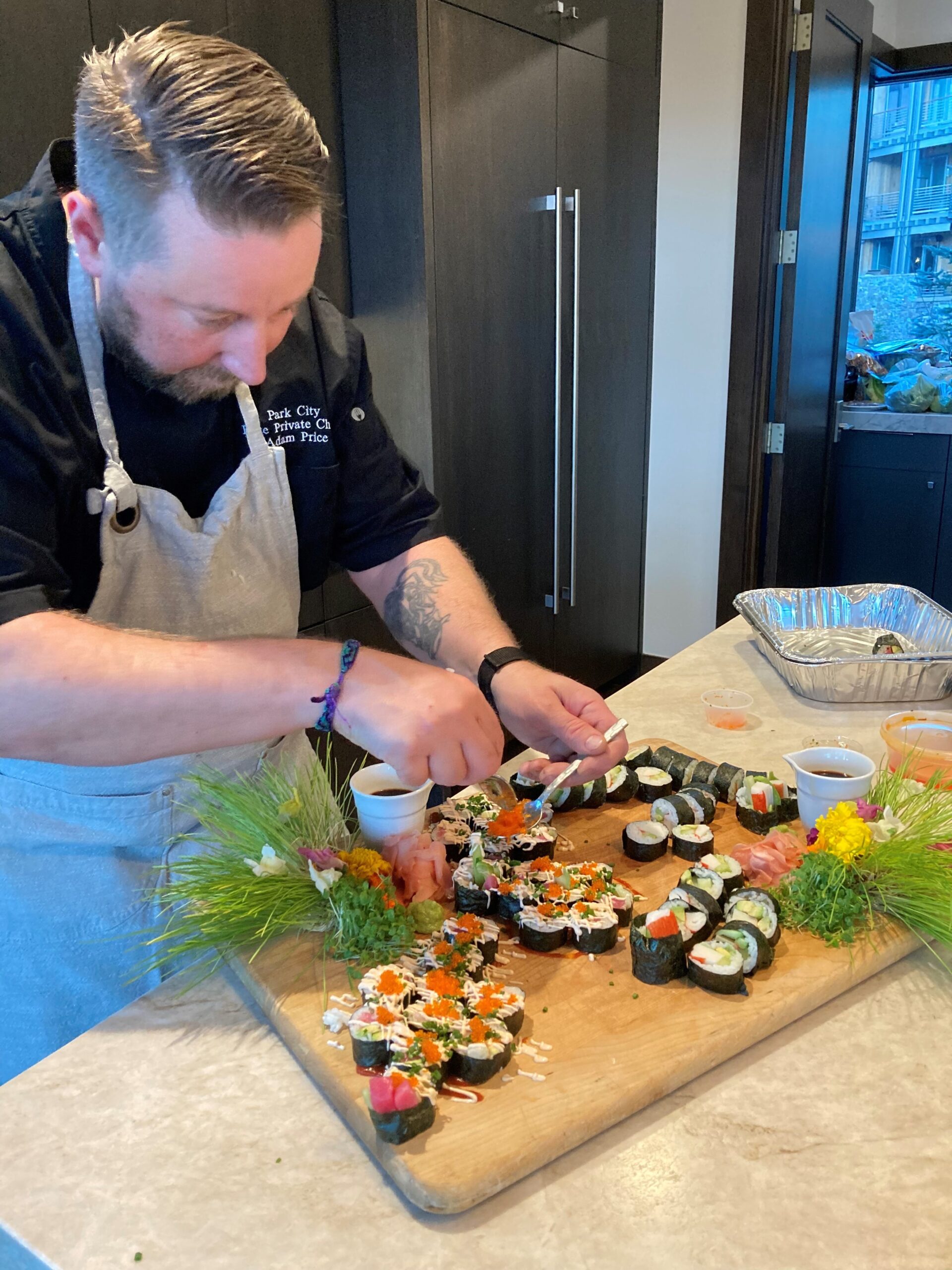 Chef Adam Price grew up in New York City building his romance with the Culinary Arts at a young age.  After receiving his Bachelor of Arts in Human Ecology from Antioch College in Yellow Springs Ohio, he moved to Park City Utah in 1997.  Adam spent time honing his craft at such notable Park City staples as Deer Valley Resort and Sundance’s beloved ZOOM restaurant.

More recently he has held Executive Chef positions in some of the most prestigious private clubs here in the Park City area.  Adam has played an integral part in developing successful concepts and menus for 10 stand-alone restaurants within these communities.

These day’s he finds the most joy cooking for private clients in their homes in the Park City area and beyond.